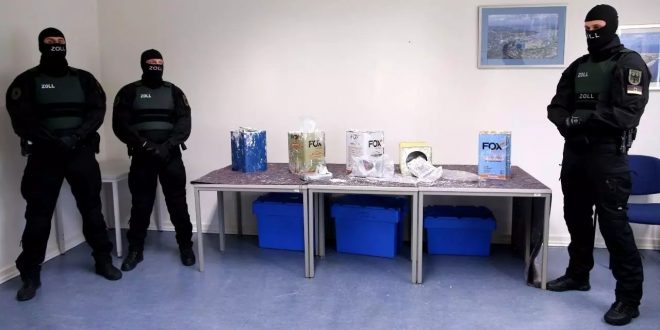 BERLIN/ BRUSSELS/ HAGUE: Berlin Germany and Belgium have seized 23 tonnes of cocaine in a record haul of the drug in Europe, German customs said Wednesday. 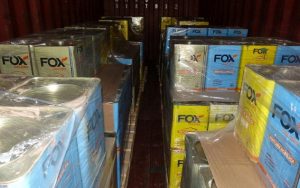 “The enormous amount of cocaine would have brought in several billion euros (dollars) in street sales,” the customs office said in a statement.

German officers had discovered 16 tonnes of cocaine hidden in containers from Paraguay at the port of Hamburg on February 12.

Joint investigations into the stash with Dutch officers led authorities to swoop on another 7.2 tonnes in cocaine at the port of Antwerp in Belgium, German customs said.

Dutch police said they arrested a 28-year-old man early Wednesday in the Netherlands in connection with both hauls totalling 23 tonnes.

Investigators also searched two premises one in Rotterdam and another in a nearby village.

Dutch police said the illicit cargo intercepted was all bound for “the same destination in the Netherlands”. 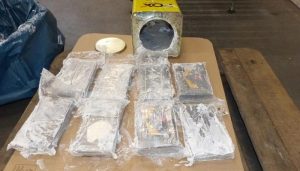 “The seized mega shipments to the Netherlands together form an absolute record. Never before has so much cocaine been intercepted at once,” they said in a statement.

Customs officers at the busy port in Hamburg had decided to take a closer look at the Paraguayan containers after noticing “clear irregularities” with its contents tin cans that were meant to be filled with putty.

“Beyond a layer of genuine goods packed just behind the container door, numerous tin cans were in fact filled with other goods,” said customs.

Investigators ordered the containers unloaded, and found the cocaine stash in over 1,700 tin cans.

“This is the largest amount of cocaine ever seized in Europe and one of the largest single seizures worldwide,” German customs said, referring to the Hamburg haul.

In all, 102 tonnes of cocaine headed for the European continent were intercepted last year by an international law enforcement project co-implemented by the UN. 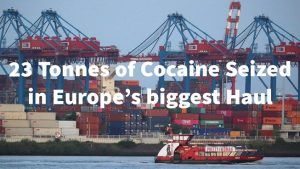 Earlier, Dutch customs discovered more than 1,500 kg of heroin in the port city of Rotterdam, which is said to be their largest heroin haul ever.

“The narcotics were found by customs officers in a container filled with Himalaya salt from Pakistan,” the Rotterdam prosecutor’s office said in a statement.

It added that it had worked together closely with the British National Crime Agency on the seizure. According to the Dutch, the seized drugs have a street value of some 45 million euros ($55 million).

Based on information shared by their UK counterparts, the Dutch arrested five suspects, three of whom had been remanded in custody.

No further information was given, but prosecutors say the investigation is ongoing. (Int’l Monitoring Desk)