SYDNEY/ MELBOURNE: Over 200 more homes have burned down in deadly bushfires that raced to the Australian coast. 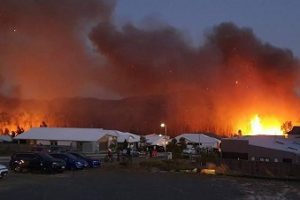 At least 43 were destroyed in East Gippsland, Victoria, while another 200 were lost in New South Wales.

On Tuesday, thousands of people who were unable to evacuate fled to beaches as fires encircled their towns.

Conditions have eased slightly, and a major road that was closed in Victoria yesterday was reopened for two hours on Wednesday to allow people to leave but in the early hours of New Year’s Day, there were still 112 fires burning in New South Wales (NSW) alone. Two were classed as emergencies.

The fires have killed at least three people in the state in recent days.

A 63-year-old man and his 29-year-old son died after staying behind to defend their home and farm equipment, police said. 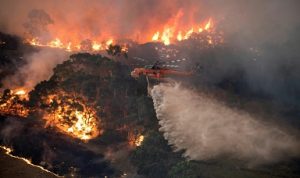 Another man was found in burnt-out car in the early hours of New Year’s Day, bringing the total of fire-related deaths this season to 13.

Mallacoota in Victoria was one of the worst-affected towns. A reporter for 9 News said homes on the outskirts had been leveled and are “still smoldering”.

The fire has now passed through the town, but many people spent the night sleeping in their cars or on deck chairs in the open. Others spent took refuge in the cinema or the main hall.

On Tuesday, the Australian government said the military would send planes, helicopters and boats to help the emergency services in New South Wales and Victoria.