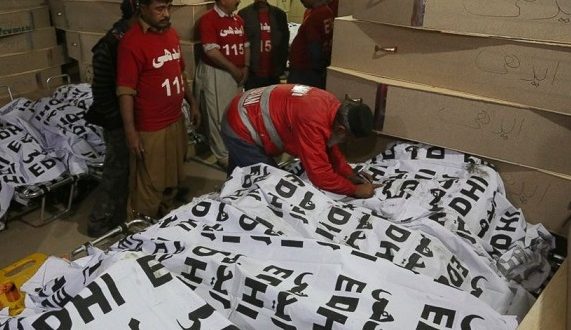 ORMARA/QUETTA: At least 14 people have been killed after gunmen ambushed a bus in Pakistan’s southwestern province of Balochistan, according to government officials.

“They were all bullet injuries, most were shot in the head,” Dr Muhammad Musa, a government health official who examined the bodies in Balochistan’s Ormara area, told media on Thursday.

The attackers were wearing uniforms from the paramilitary Frontier Corps and forced passengers to disembark from the bus before shooting them, Provincial Home Secretary Haider Ali told reporters.

The passengers were travelling from the southern city of Karachi to the port city of Gwadar by the Makran Coastal Highway when their bus was ambushed early on Thursday morning by masked gunmen near Ormara area, sources reported.

“This is a very remote place, about 60km from the nearest town in Ormara and 300km from Gwadar,” Asif Shawani, District Health Officer in Gwadar, claimed.

An alliance of ethnic Baloch separatist armed groups has claimed responsibility for the attack in an emailed statement.

“… Those who were targeted carried (identification) cards of the Pakistan Navy and Coast Guards, and they were only killed after they were identified,” the spokesperson for the Baloch Raaji Aajoi Sangar (BRAS) said in the statement.

The incident took place in Buzi Top area in the wee hours on Thursday. However, the identities of the victims were yet to be ascertained.

In a similar incident in 2015, gunmen kill 20 abducted bus passengers in Mastung after identification.

The victim families of the said terror attack told PMI that it has become the routine of Pakistan since last many years that despite all official statements regarding that government has controlled terrorism and despite all operations against defunct groups, the terrorist organizations can easily achieve their targets on pinpoint where and when they want according to plan.

They said, it was the fifth terror incident during the last 7 days including Quetta’s Hazarganji and Peshawar’s Hayatabad in which over two dozen innocent people were killed and multiple injured including security officials.