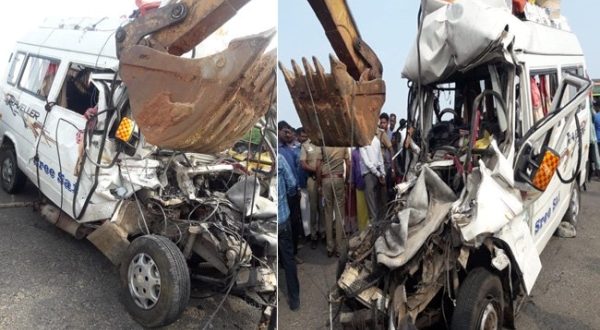 Hyderabad: Ten Ayyappa devotees were killed in a fatal road accident on Tirumayam by-pass road in Pudukottai district of Tamil Nadu on Sunday, after a truck rammed the van in which they were traveling. The deceased were natives of Narasapur in Medak district of Telangana, it is learnt. A group of 15 devotees was traveling to Telangana at the time of the incident.

The van bearing registration number AP 28 TD 6809 was carrying the devotees at around 2 pm, when the incident occurred. The truck crashed the van from the opposite direction, and the truck driver escaped from the spot. The bodies have been shifted to Tirumayam government hospital. SP Selvaraj reached the spot immediately and registered a case. The investigation is on.

Leader of Opposition in Andhra Pradesh legislative assembly and YSR Congress party president YS Jagan Mohan Reddy expressed his shock at the accident and extended his sympathies to families of the victims. On the other side, senior TRS leader and Siddipet MLA Harish Rao also conveyed his condolences to the victims’ families. He had asked Pudukkottai district Collector to arrange for shifting the bodies to Telangana.