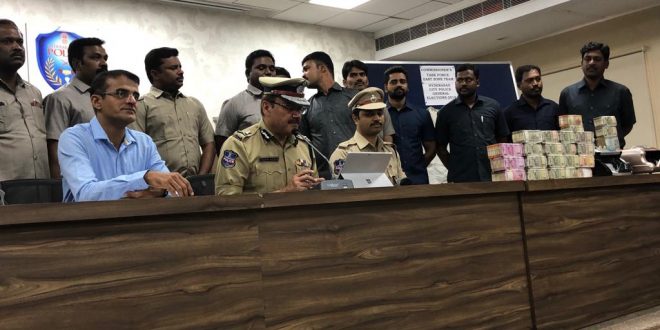 The police conducted the raids in view of general elections – 2019, as  the model code of conduct is in force, the Commissioner of police said in a press note. Police seized from Devesh Kothari a   Honda Activa bike and  Rs.Fifty Lakhs; from  Bhakti Prajapati a  Honda Activa bike  and   Rs.Twenty Three Lakhs; from  Khan Bilal Naseem a  Hero Passion Pro bike Rs..5,70,400/-; and from  Vishal Jain a  Honda Activa  and Rs.11,80,000/-.

On enquiry they did not reveal any account of the said cash which they were carrying. Hence, police  seized the cash and the vehicles, etc.  The seized material will be  handed over to IT Department for further investigation.

Mr Anjani kumar ips commissinor of poloce Hyderabad appealed to the general public that since the General Elections-2019 Model Code of Conduct is in force, Public meetings and rallies should not be organized without permission and the public who are carrying cash during the General Elections-2019 should also carry the documents pertaining to the cash. Regular vehicle checking will be conducted and strict surveillance will be maintained in this regard.(PMI)